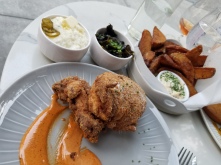 Sitting at the doorstep of Rittenhouse Square from Aimee Olexy and Stephen Starr is The Love. It is a beautiful dining destination with a warm ambience. With impeccable, personable, and friendly service they shined throughout service. Each meal was explained and served with care. So you ask what about the food? Well that’s where they definitely showed THE LOVE. I enjoyed the meal as everything was delicious and would certainly return. Pictured is:

Summer Corn Soup with coconut milk, lemongrass, miso, crispy rice noodles, and togarashi spice and this was the highlight of the meal. REALLY GOOD!

Love Bird which is buttermilk fried chicken over comeback sauce, buttery Georgia grits, braised collard greens, and a side of steak fries.

Comments Off on The Love – Philadelphia, PA

As their name implies “Cheu  Noodle Bar” (CNB), noodles are the
name of the game and main attraction for most at CNB. With me
being familiar with Chef Ben Puchowitz and Shawn Darragh’s noodle
endeavors all the way back to Chef Ben’s days cooking at Matyson
when they would have a pop-up restaurant called “Round-Eye Noodle”
every now and again seeking investors, I could tell all the way
back then, that what they were doing with noodles was something
special. Well fast forward a few years. They have a restaurant of
their own, a signed a lease for a second location at the former El
Zarape at 12th and Passyunk and Morris Street intersection, and
Chef Ben is being honored by the James Beard Foundation as a
semi-finalist for “Rising Star Chef of the Year” award.

Opening the door to CNB showed without a shadow of a doubt that
the duo of Chef Ben and Shawn has been a very succesful
combination. Not a seat left in-house, jam-packed from front to
back. Great hip and trendy decor splatters the walls and ceilings,
nice music pumping through the speakers, and a staff that was as
friendly as I have ever seen in a place as busy as CNB was that
day. With my heart set on CNB, I was not deterred from having no
where to sit. I went with plan B, take-out. Having had their
noodles in the past, I decided to go everything but noodles that
day. I started out with the Black Garlic Wings.

The Black Garlic Wings consisted of lightly fried chicken wings
with shishito peppers, lime, and cilantro. At first sight I was a
little taken aback and unsure, but after first bite I was hooked.
They were perfectly balanced in flavor, cooked to perfection with
a nice crisp on the exterior even with all of the sauces applied
while being nice and juicy on the inside. The combination of
spices and sauce really were something special and I highly
recommend you have an order to start any meal at CNB. My main
course would be CNB’s version of Fish and Chips.

The Fish and Chips would be Smoked Fish Ribs and a side of Cheu
Fries topped with miso truffle aioli and fish flakes. I will call
this the Yum and Yummy. The smoked fish ribs worked on so many
levels, even for a certified bbq judge as myself who loves pork
and beef ribs. The skin was extra crispy while the fish was as
tender and soft as biting into a cloud. The glaze on the ribs
worked beautifully giving each bite a wonderful array of tastes
while still being light enough to allow the profile of the fish to
shine. If that was not enough, the fries were amazing. I have
never had such a combination top my fries before and it was
wonderful. The fries were cooked just the way I like them as well. Not
too soft and not too crunchy. Just the right texture and with the
topping of the miso truffle aioli and fish flakes it made them
spectacular.

With CNB specializing in noodles and being able to produce so
extraordinarily with not a single noodle dish in my order, Chef
Ben and Shawn certainly have nothing to stop them from a long and
successful journey in the culinary world. I only hope the
consistency and quality can still be upheld with multiple
locations on the horizon. If this can be done, Chef Ben and Shawn
may be in the same sentences as the Vetri, Garces, Starr and
others who have created Philadelphia to be the great dining
destination it has become to be known globally now. Will the day
ever come that Philadelphia is not synonymous with cheesesteaks
and soft pretzels? I do not think so, but with CNB joining the
crowd we have so many more interesting things to eat and talk
about, and that is always a good thing.

Overall
Four and Half out of Five Stars

Hey Everybody! Check out that “Fat Pig”

It seems like Philadelphia has gained an affirmation for all things Brooklyn, New York related lately. The Piazza at Schmidts held a Brooklyn Flea Market it seemed like every weekend this summer and before that Philadelphia’s restaurant mogul Stephen Starr recruited Brooklyn based BBQ restaurant owner Joe Carroll to open another Fette Sau (FS) here in October of 2012 connected to another Stephen Starr location Frankford Hall and just a few blocks away from the hipster hideaway Piazza.

I do not know much about Brooklyn, but what I can tell you is that if there are more restaurants up there as good as FS I hope more and more of them transplant their way down to Philly for their second locations. As you will see in the pictures below I got a little bit of everything at FS. Nothing I had there disappointed me in the least except for one particular thing, but their were some ups and downs. FS stands for fat pig, and if I could go there more often I just might become one.

Lets just get started with the great. The short rib is hands down AMAZING! Go to FS just for it. Eat it in all of its wonderfulness, it is that good. I have never had a better one yet, and I have eaten a lot of BBQ. Just look below at me eating it in all my glory and you will have picture of how happy it can make a man. 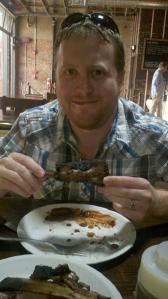 The baked beans were fabulous as well. Very nice chunks of burnt ends, beautiful combination of spices thrown in, and just a delight to eat. The ribs were cooked perfectly and of excellent quality, texture, and taste as well. Just when put up against the short rib it had some big expectations to follow. The pork was good, but just not anything notable and I have had better at much cheaper rates other places and the mushrooms were a dud. They were nice, but I was sort of over them after popping four to five of them in my mouth. They would be great for free as a mini-side, but not something I would pay for.

With the good must come the bad though. FS is a carnivore paradise and a damn good BBQ joint at that. What they are not, is somewhere that has any resemblance of good BBQ sauce makers. I enjoy my BBQ wet or dry, but some people insist on having to have some sort of sauce on their meats. If you are one of these people you may want to bring a cup of your own sauce to FS. FS’s sauces to me and the person who joined me were so hands down terrible, they actually made me second guess if the meats were as good as I thought they were until I took another bite without sauce on them. I hate to admit it, but I would rather have some mass produced corn syrup infused BBQ sauce sitting on the table instead of what they put out there. It is shameful and completely unacceptable for the quality of meats they are producing that someone could actually leave there thinking that FS is not making good BBQ if they can not enjoy eating their meats dry only. I actually thought maybe it was just the container on my table, but the sauces tasted exactly the same on the other tables as well, so I do not know if the entire batch was bad or if that is really what they serve on a daily basis. I know what I said was harsh. Just know what you are in for with the sauces, but other than that you must go to FS for some of the best BBQ meats in the Philadelphia region. Be aware also that FS is not cheap to eat at, and even with the sauce debacle, mushrooms not being that great, and pork only being ok, FS has my heart with short ribs I feel in love with.

Overall
Four out of Five Stars